Competition management consists of initial setup and recurring administration of competitions of all levels, from children tournaments to major continental cups. Its most common features are team/roster submissions, scheduling of matches, allocation of referees and other officials to matches.

COMET supports any of the 3 disciplines (sports) governed by FIFA: Football, Futsal and Beach Soccer. Each of these disciplines has its own rules of the game and the functionality of COMET is adjusted to each of them. E.g. match report functionality is different for Futsal (as opposed to Football) as it allows entering team events (accumulated fouls, time-outs), futsal-specific match events (6m penalty, 10m penalty) and futsal specific match roles (e.g. Timekeeper).

There are three gender options for a competition: male, female and mixed. Each competition must have a defined gender option, which impacts the eligibility rules for players. E.g., male players will not be eligible to play in female competitions, and will not be shown on the list of available players for that competition. The third (Mixed) gender option is most used in child competitions where boys and girls play matches together in gender-mixed teams.

After selecting a gender, an age category must be defined, such as Seniors, U21, U19, U17, etc. The age category as well impacts the eligibility rules for players. E.g. a 22-year old player is not eligible to play in U17 competitions, and will not be shown on the list of available players for that competition. Age categories and their age constraints can be configured in accordance with Association requirements. Some other settings, such as match length, halftime break, number of players on the field are also defined on the age category level, but can be overridden on each specific competition.

In a round-robin competition, each team meets all other contestants in one or more rounds. E.g., Double Round Robin is the most common scenario, which assumes that a team will meet each other twice, once home and once away. The standard round-robin algorithm (Johan Berger) is predefined in COMET and is used to automatically create competitions rounds and assign matches (ordered pairs of teams) into rounds. While the Berger algorithm is a global standard and most widely adopted (in all sports), a custom national algorithm can be configured as well.

Elimination competition is used for qualification rounds, play-off rounds, cup competitions, where winners of 1 or 2-leg ties are promoted to the next round, while the losers are eliminated. The standard seed-bye algorithm is used for the automatic creation of rounds and matches (ties). Each round of an elimination competition (e.g. Quarterfinal) may consist of one or two legs. The system automatically promotes the winner into the next round.

The matches can be automatically created based on standard round-robin and elimination algorithms. Round dates and times can be predefined and are then preset by default on all matches, per round. Match stadiums can also be predefined by default, based on that club/team default stadium, or the selected default stadium of that team for that specific competition.

In addition to automated competition scheduling, if necessary, the competition administrator can manually enter the matches in COMET, including rounds, dates, times, and stadiums for a specific competition. It is also possible to prefill a simple predefined Excel template, and then import it into COMET, which will trigger a batch creation of matches, as defined in the Excel.

A Gantt-like scheduling tool with drag-and-drop functionality allows competition administrators to easily reschedule matches in a view that spans across multiple facilities and pitches. It shows facilities and pitches on one dimension, and the timescale (daily, weekly or monthly view) on the other one, and allows visual comparison and drag-and-drop adjustments. It has the capability to alert on conflicts, i.e., two matches overlapping on one pitch. 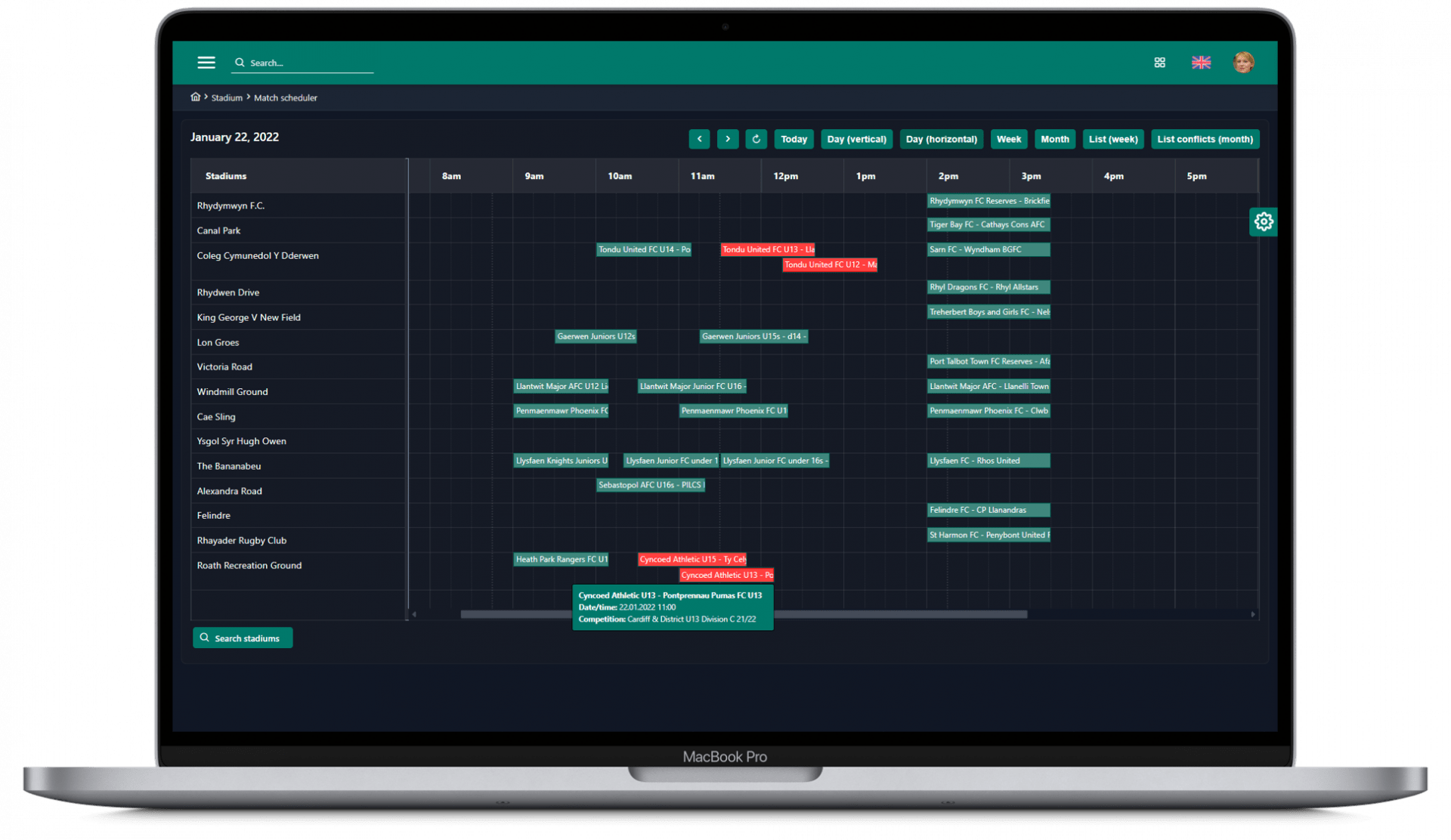 These settings are mostly inherited from the competition type and age category, and some of them, such as max-min date of birth (age) constraints, match length, halftime break, number of players on the field, can be overridden for that specific competition in this section.

The system can enforce various constraints in relation to the pre-match entry of lineups, such as a maximum number of players in the lineup, maximum substitutions in regular time versus extra time, whether rolling/flying substitutions are applicable, etc.

Based on the settings entered in this section, the system will enforce a maximum number of foreign players in the team registered for that competition, in the match lineup, or on the field.

The youth section is usually used for promoting young players in senior competitions. Based on the settings entered in this section, the system will enforce a minimum (or maximum) number of youth players (born after the reference date) on the field or in the match lineup.

It is possible to set a color for the competition, which will be used for displaying that competition in calendar view and in reports. Setting the initial status for match official appointments to Entered (instead of Scheduled), will allow appointers to make a batch update from status Entered to Scheduled, and control when appointment notifications are sent to all referees and match officials. 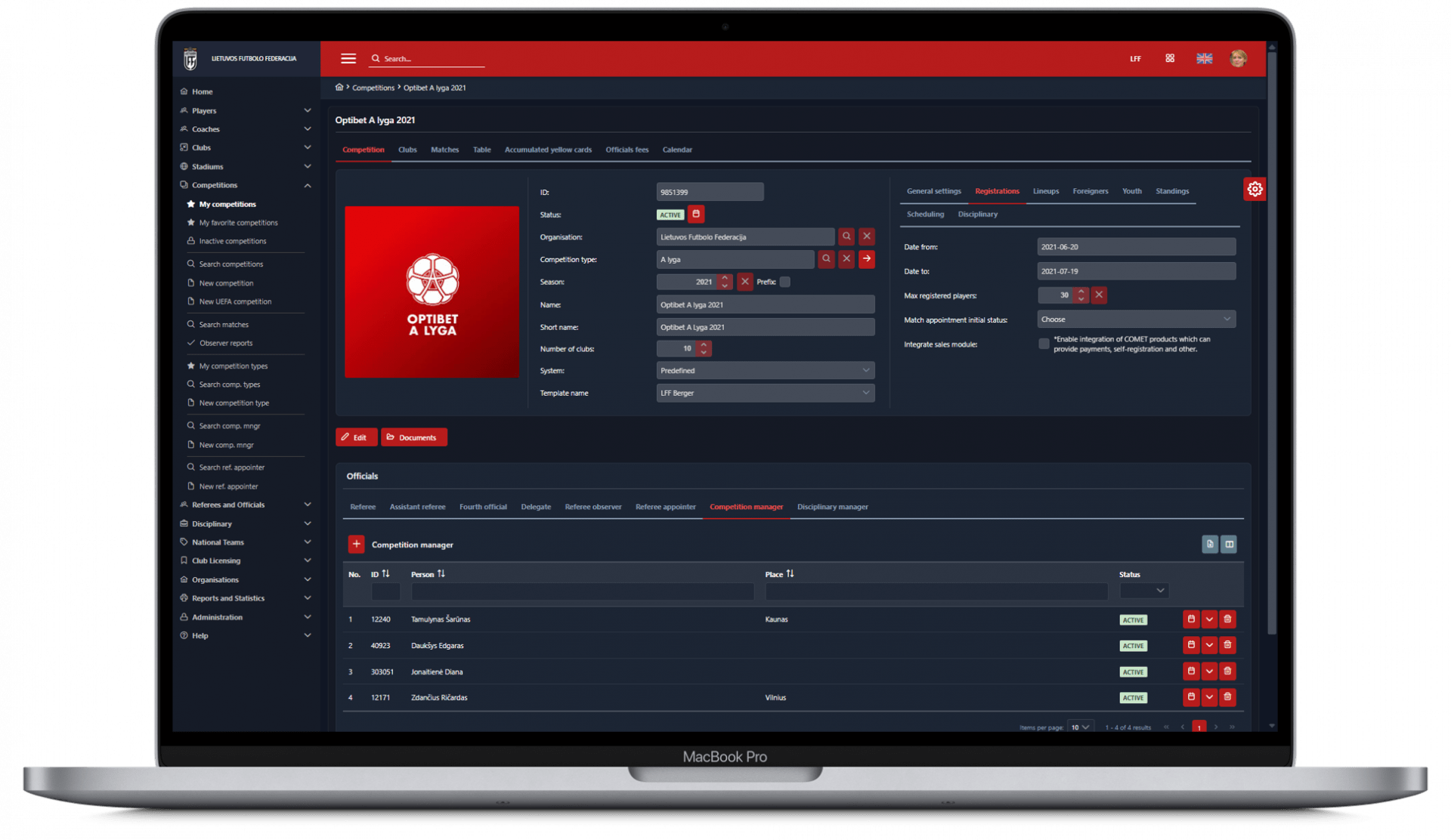 Match officials appointed to the competition have the possibility to confirm or reject that appointment. This is particularly useful for single-location tournament competitions, such as confederation qualifiers, where officials accept the allocation to the entire tournament, and if accepted, they then do not need to accept appointments to specific matches.

Depending on the configuration, stadiums are added to the competition by the club. In this case, that stadium will be set by default to all home matches of that club/team, and will override any stadium setting on the club or team profile

Competition Team Workflows are configurable, e.g., in some cases, the Competition Team needs to be confirmed by the governing body that organizes the competition, after it has been submitted by the club. 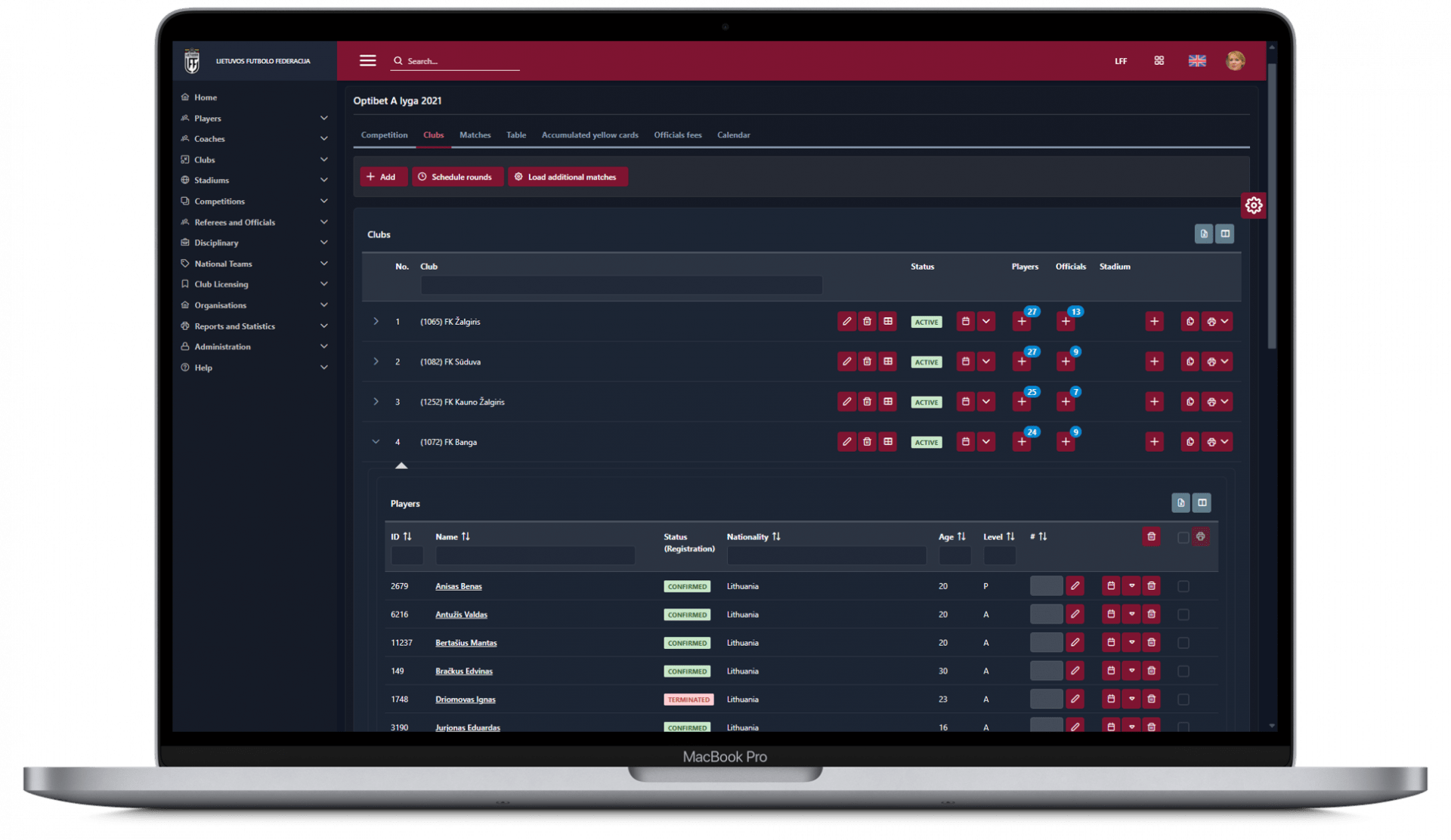 The Referee Administrator can appoint referees and other match officials on a specific match, or use the Search Matches console to make appointments for multiple matches at the same time, in a matrix view, with matches on one dimension, and official roles on the other one. Indicators show referees who might already be occupied in that period of time or have reported an absence/unavailability.

The COMET system can send e-mail notifications regarding appointments and appointment updates via the platform automatically. Match officials are notified that they have been appointed to a match when the status of the match is changed from Entered to Scheduled. A batch status update and send-out of notifications are possible from the Search Matches console.

After the match officials are appointed, and the status of the match is set to Scheduled, the officials receive an e-mail and push notification with the details of the appointment. Officials are then able to provide their response, i.e., confirm or reject the appointment. The association can configure the response options, so in some associations, a response is required, and the referee is not deemed officially appointed until she/he confirms the appointment, while in others the confirmation is not required, and the referee is deemed appointed right away.

The referees (and other officials) can submit themselves the dates and times when they are unavailable, which then helps Referee Admins and Competition Admins in assigning them to particular matches. While reappointing referees or match officials, the system displays all conflicting appointments or any other constraints (e.g. unavailability of referees) that are relevant for appointment decisions. 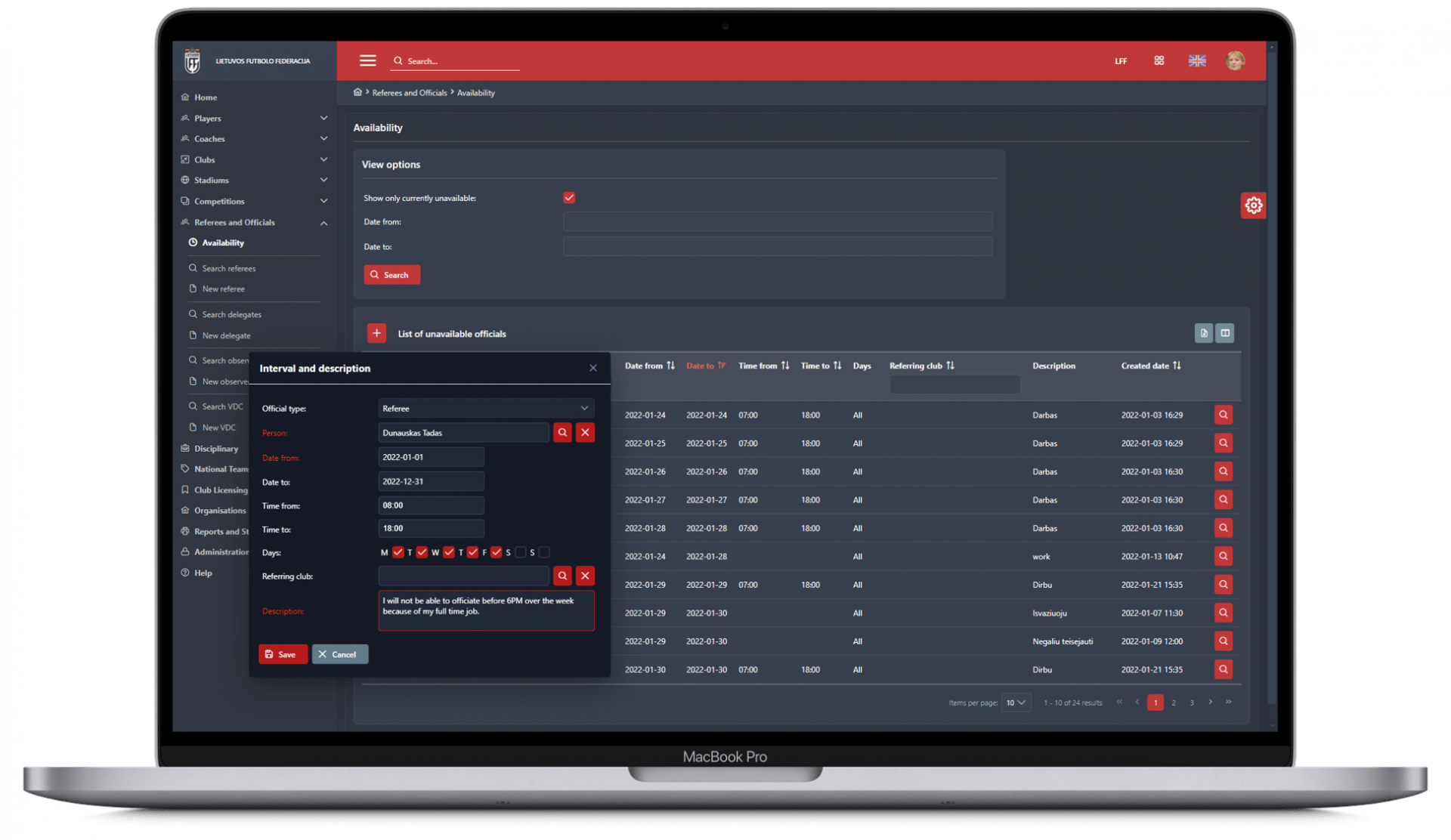 The home page of referees and officials is “My Next Matches” console, where officials can see all the matches to which they have been appointed. After selecting the match from this list, the referee will be able to add events, confirm the match and change its status to played, while other officials will be able to complete their specific reports. Officials are able to see their previous appointments and access matches from the “My Previous Matches” console. On this console, referees are able to see their ratings and access assessments after they have been entered by Assessors and confirmed by Referee Admins.

Search matches console is used for searching and assigning match officials to the match, rescheduling and relocating matches, or making batch status updates of matches. Search Matches is presented in a matrix view, with matches shown on one dimension, and official roles on the other one.

Any user can mark some competitions as favorites. In that case, all favorite competitions of that user will be presented under the Favorite Competitions console, which is convenient for quick access to the most relevant competitions. 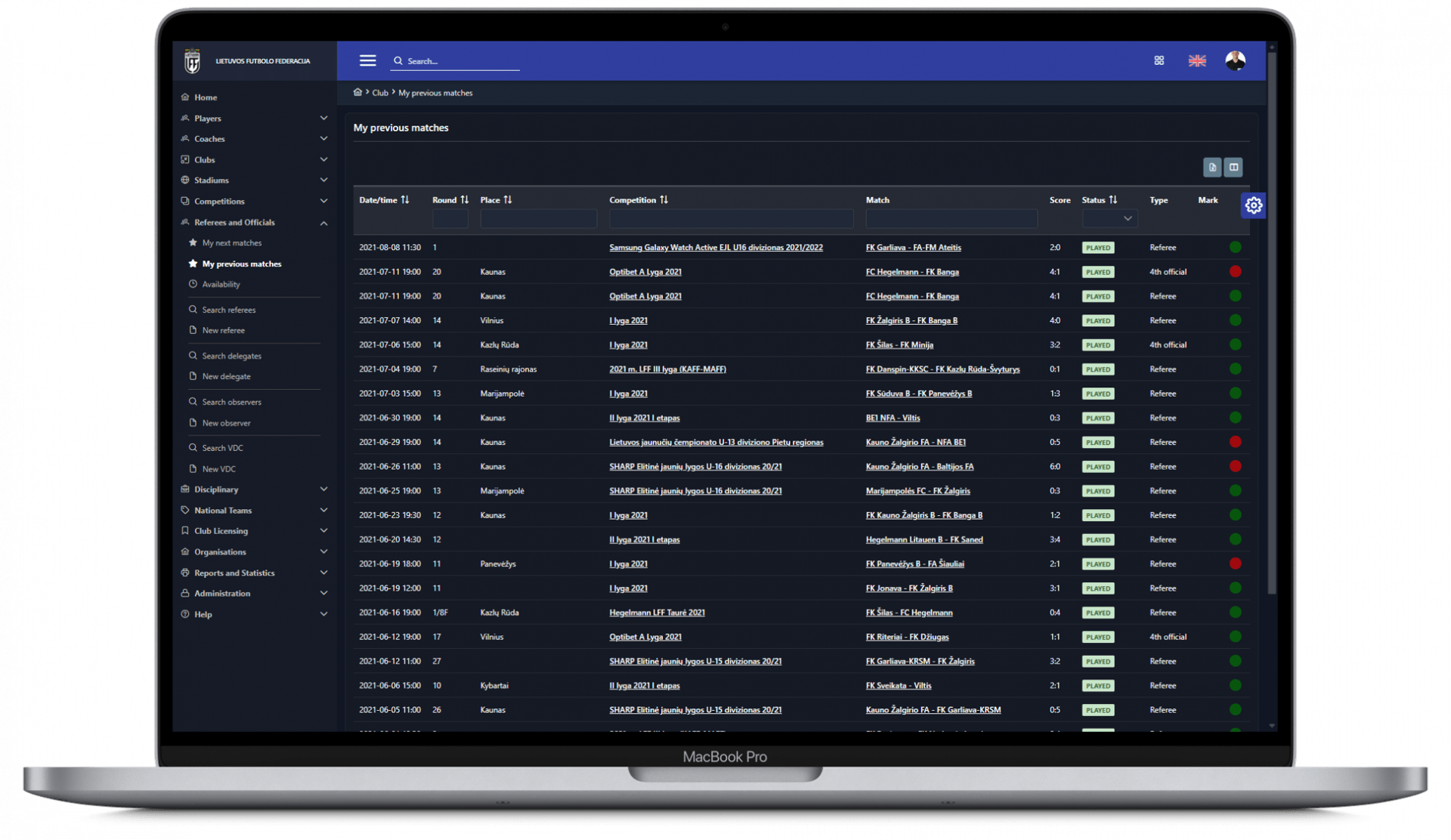 Players, coaches and team officials can be allocated to the National Team in any FIFA-governed sport/discipline (e.g. Football, Futsal, Beach soccer). One national team player can be active in more than one football-related discipline (e.g. football and futsal).