Registration process is a prerequisite for competitions, and relates to all football stakeholders, such as players, coaches, referees, and relevant organizations, such as clubs. Its most common functions are registrations of players, national and international transfer workflows, administration of clubs and facilities data.

Clubs are registered underneath a governing body (e.g. National Association or Regional Association), and are categorized by club type. They have a local (Rank) and international (FIFA) category, and a default/home stadium, that is set by default in home matches of that club.

Club can have various types like football club, futsal club, women’s club, beach soccer club and more. Each of them can have specified restrictions for disciplines (sports) and genders. E.g. a Women Football Club may accept registrations in disciplines football or futsal, but only of female gender.

Possibility to re-register players in bulk prior to the start of a season, simply by selecting/checking players who are staying in the club. An automated procedure on a certain date automatically terminates all unchecked players, and leaves the checked players registered.

Each club defines its own playing kit for players and goalkeepers. Kits are selected on the lineups form, prior to each match. They can be defined both on the club level and on the team level.

On top of players, coaches, and technical staff, the club can also register administrative club officials, such as President, Treasurer, Secretary, etc. Official registration types are predefined by the Association. 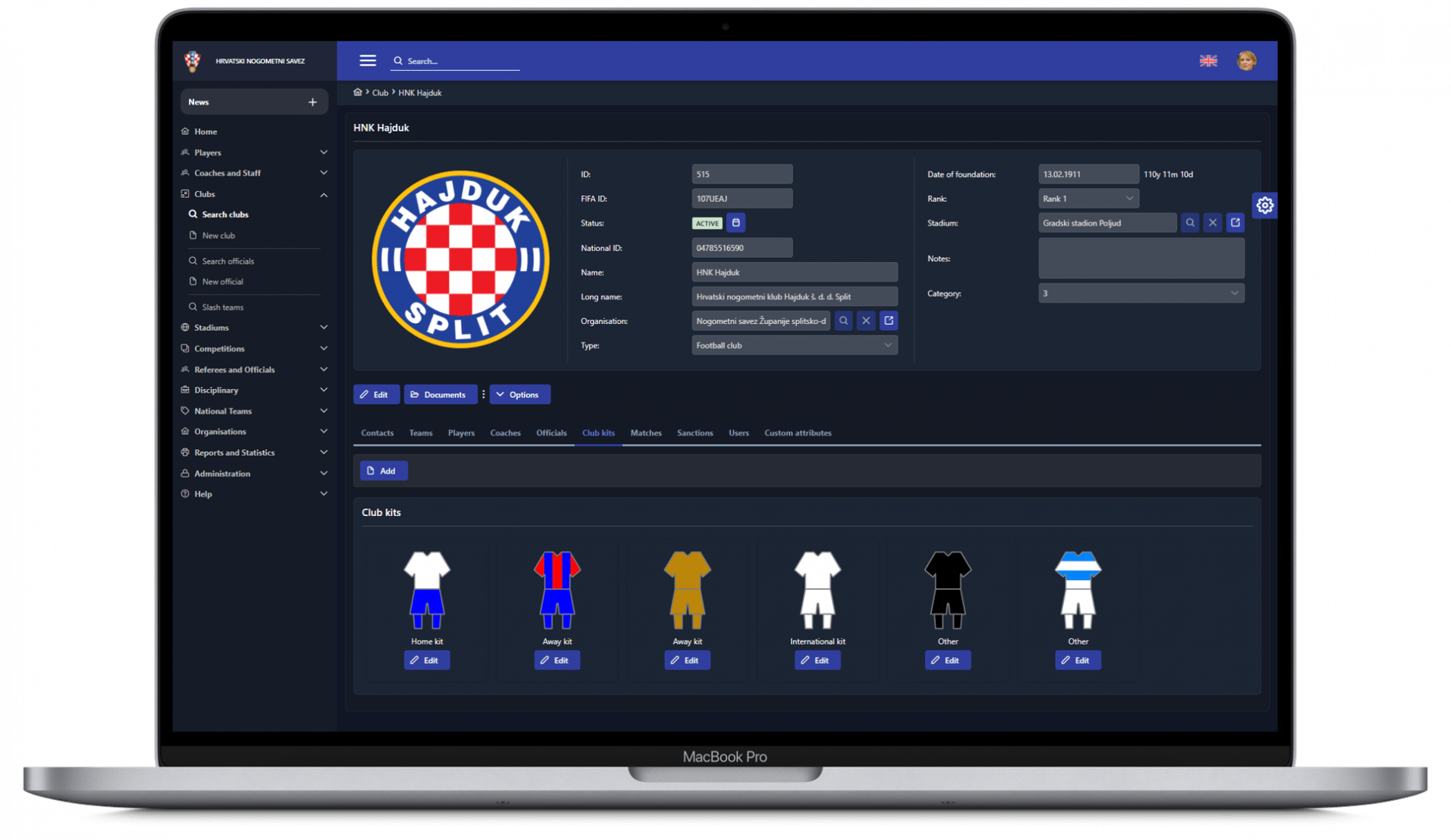 The Association may setup its own specific workflow to be consistently applied on all player registrations. In the most common scenario, the club enters the necessary data in the system and then submits the registration which then needs to be confirmed by the governing body. The approving governing body is most commonly the National Association or Regional Association, depending on the organizational affiliation/rank of the club.

System tracks the gender for each registered individual, as per FIFA Data Standard. Gender is a mandatory field as it has an impact on player’s eligibility in certain competitions. E.g. male players are restricted from playing in female competitions.

Possibility to define various registration types like first registration, transfer, eligibility, loan, etc., that are used to categorize registrations. Furthermore, the registrations are divided by level, amateur vs professional, as per FIFA RSTP definitions.

Simplified form allowing administrators to complete the player’s history, i.e., retroactively add player registrations. This is commonly used prior to an international transfer and generation of a FIFA Player Passport (in cases where the player’s history is incomplete for any reason). Retro-registration is often used for national team players and officials for purpose of tracking historical competitions and statistics.

Consoles allow Association users to access in real-time pending registration tasks, and act upon them. Most common are consoles displaying the list of player registrations that are due to be reviewed and confirmed by the governing body. 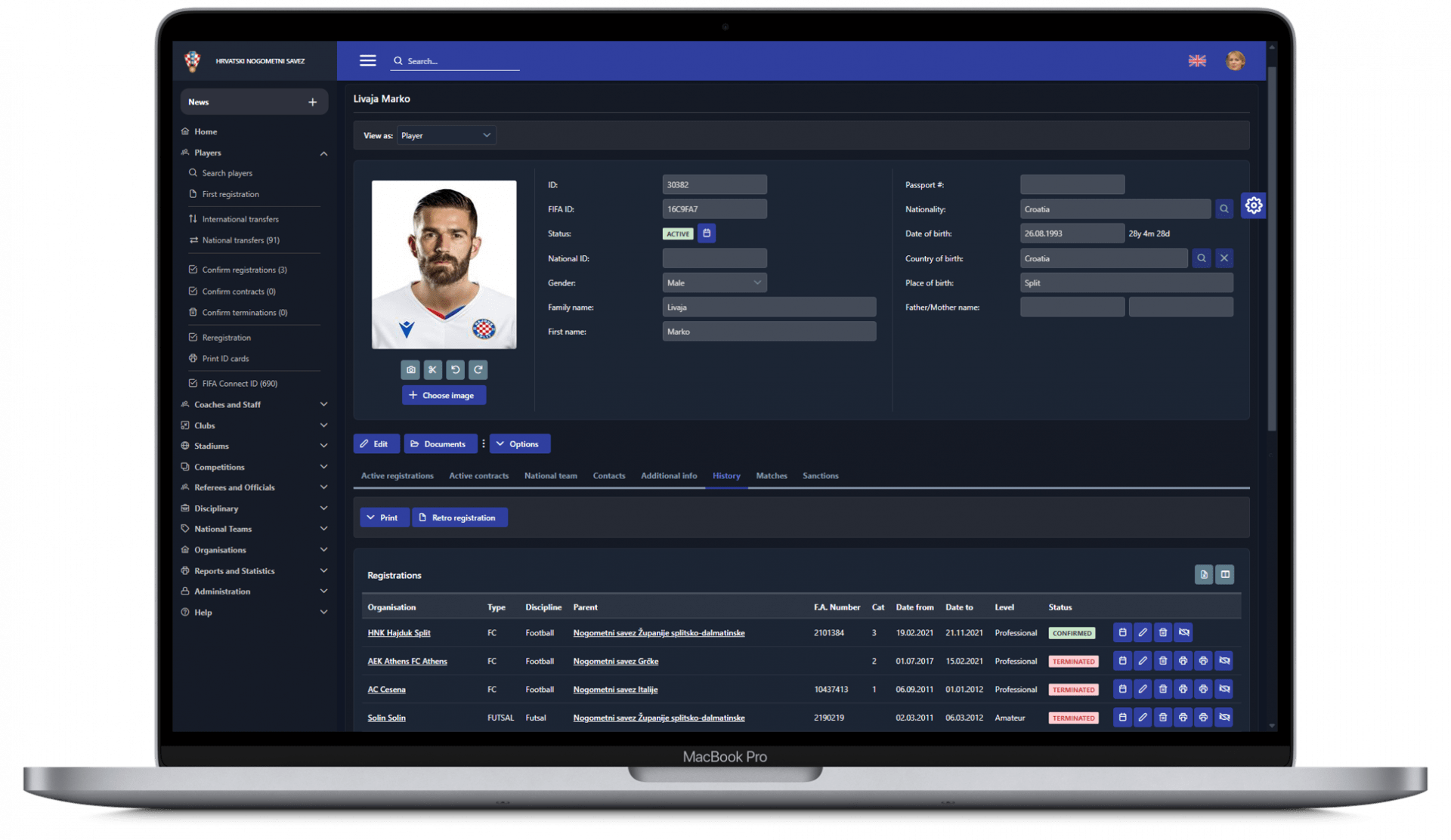 A club may initiate a transfer, by entering/submitting a new registration for a player that is actively registered for another club. The new registration can only be confirmed after the previous registration has been terminated by the releasing club. In case of disagreement, the player administrator of the parent organization of the clubs may administratively resolve the conflict in the system.

Ingoing and outgoing international transfer workflows are managed in the system by the local club involved in the transfer and the national association (usually International Department or TMS manager). Standard required reports are generated automatically from the system, such as the FIFA Player Passport, ITC request, approval, and provisional registration.

COMET can store all required data about the transfer agreement between the releasing and engaging club, including declared/planned payment details related to the player transfer. Authorized users can upload a copy of the transfer agreement, can specify the various types of payments (fixed fee, conditional fee, buy-out fee, etc.), and can add instalment schedule, with amounts and dates for each instalment.

Authorized users can track the actual performance of the transfer agreement, by entering the actual (realized) payments executed by the engaging club in accordance with the transfer agreement. The payment amounts are validated against previously entered planned payment details and evidenced with the upload of proof of payment. The declaration of both transfer details and actual transfer payments meet the requirements of the FIFA Clearing House, whose aim is to use declared information for calculation and distribution of training rewards.

Consoles allow Association users to access in real-time pending transfer tasks, and act upon them. Most common are consoles displaying the list of player transfers that are due to be reviewed and confirmed by the governing body. There are separate consoles for international and national transfers, as these processes are subjected to separate rules and workflows. 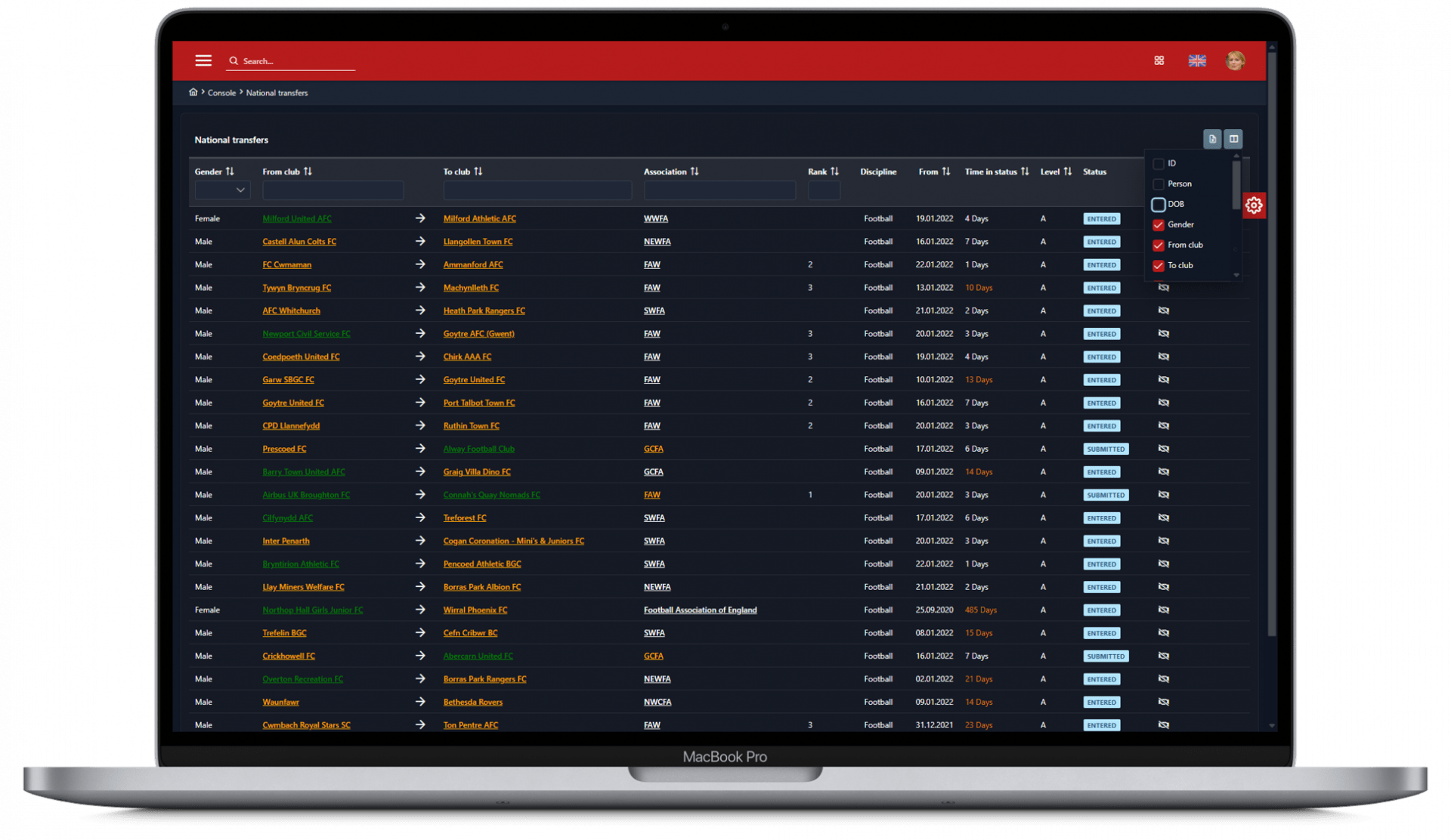 Possibility to enter contract annexes, such as a contract extension to an existing contract.

Coaches can be assigned a license that defines their professional level. Coach licenses have a license type (e.g. UEFA PRO, UEFA A, UEFA B, domestic licenses), status and period of validity/expiry.

The registration of a coach to a Governing Body (membership in National or Regional Association) can be used to register a coach in the system that is currently not necessarily employed by a club. 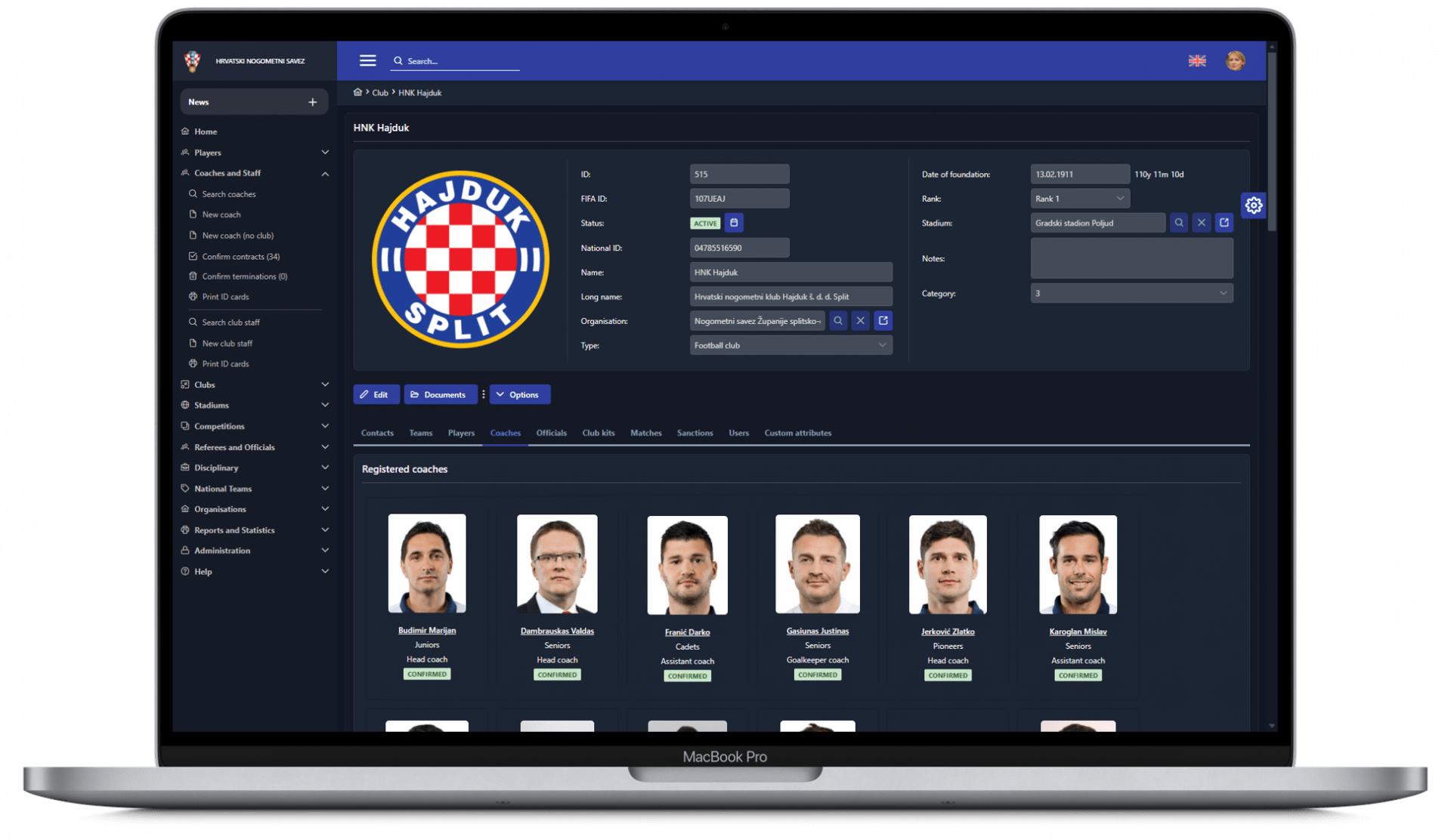 Referees are usually registered by the governing body, and more specifically by the refereeing department. The main role of the referee in the system is to enter and confirm match reports where they have been allocated.

Delegates (or Match Commissioners) are usually registered by the governing body, and more specifically by the competition department. The main role of the delegate in the system is to review the organizational aspect of the match (mostly at higher competition levels) and enter its own specific report.

Other roles can be registered and take part in match day operations (mostly at higher competition levels). They can be just allocated to matches, or on top of that complete their own specific report. Examples of such official roles are Media Officer, Security Officer, Doping Control, Match Coordinator, etc.

Referees and Referees Assessors are categorized in accordance with the license type structure as defined by the national governing body. Beyond international licenses such as FIFA referee, domestic licenses are allocated based on the professional level/experience of the referee.

Facilities can have more fields (grounds) defined, which are then used as units for scheduling matches. In competition scheduling, matches can be allocated either to a facility or to a specific field on a facility.

COMET features the possibility to upload photos of the facility, for easier recognition (in conjunction with geolocation) prior to the match, and presentation in external apps and websites.

Facilities may have their own administrative officials registered in the COMET system. In practice, this applies only to larger stadiums or venues with dedicated administration and maintenance. 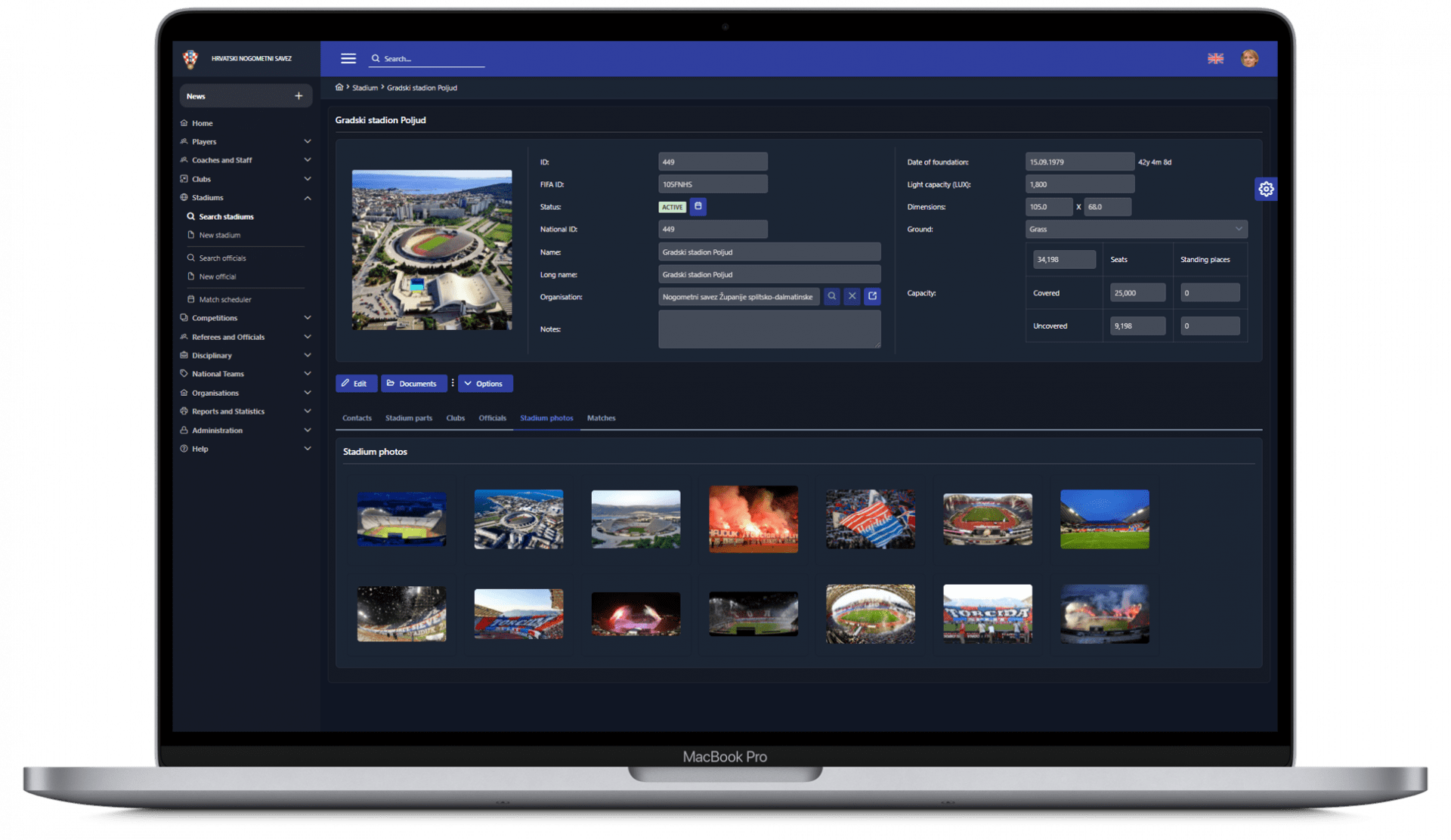 Registration of individuals/persons who act as intermediaries, in accordance with FIFA requirements. Individuals can act independently, or as registered members of an Intermediary Agency

Registration of intermediary organizations which act as an agency, in accordance with FIFA requirements. Individual intermediaries can be registered to an Intermediary Agency.

Transactions to intermediaries in relation both to transfers and contracts are recorded in the system and linked to the specific registration of the player. Transaction values are compiled in a report which meets the requirements of FIFA Regulations on working with Intermediaries.